You know what has always haunted me? The fear of making bad decisions with permanent consequences. Maybe that’s why designing our new kitchen took three times as long as actually ‘doing’ it.. I was scared to death of making a bad, un-fix-able mistake.

The ultimate visual representation of an un-fix-ably bad decision has always been the face tattoo. Enter Cindy Crawford’s handsome 20 year old son (and part time model) Presley who last week had the word “misunderstood” inked underneath his eye.

Reminds me of the black bean burgers I made on Sunday.. (hang with me here.) I like to add interesting ingredients to boost the flavor so I was delighted to find a ziploc bag of cut up orange peppers in the freezer. I put about four pieces into my food processor along with the other ingredients, pulverized them and mixed it all together before shaping about 12 bodacious patties. 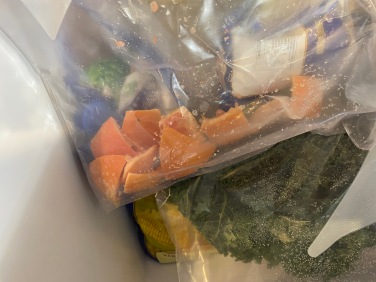 The taste was curiously off when I ate mine later..so much so that I could barely finish the burger. I asked my husband if he noticed anything different and he said “no” although truthfully, the man had so much ketchup on there he wouldn’t have noticed if I’d served him a brillo pad on a bun.

So I’m lying in bed at about 4am this morning..my mind zipping through its usual rolodex of concerns starting with the dilemma facing those poor folks stuck in Japan on the Corona Cruise when it came to me…

And then I went back to sleep.

Woke up again at 6:30 and beelined it for the fridge to examine the half-empty ziploc bag of peppers in the freezer and sure enough..they ain’t peppers!!!- they’re grapefruit rinds that I saved to use on my skin. (lonnng story 🙄)